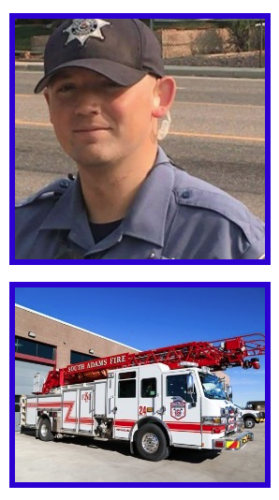 On January 24, 2018, Adams County Sheriff Deputy Heath Gumm, gave the ultimate sacrifice when he killed in the line of duty responding to a call. His family and friends created The Deputy Heath Gumm Foundation to honor his legacy and to continue to support the community in just the same way that Heath did.

Due to the Covid-19 precautions, we will not be able to host a large group of spectators this year, but you can join us LIVE on The Deputy Heath Gumm Facebook page. We appreciate the support for the newly created Foundation, which in turn will provide support for so many others. Deputy Gumm’s dedicated service to the community is the reason we push forward and find ways to give to others.

In partnership with the South Adams Fire Department, the Gummball Drop will see a thousand golf balls dropped from the ladder of the firetruck dedicated to Heath.

The ball that is closest to the target will be awarded a $1,000 cash prize. The event will be live streamed on The Deputy Heath Gumm Foundation Facebook page on Saturday, April 24 at 12:00 pm.