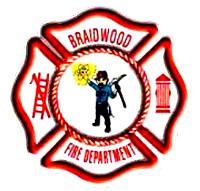 Braidwood Fire Department is dispatched by the Western Will County Communications Center (WESCOM).