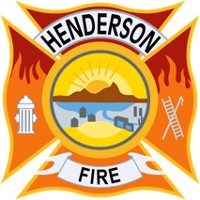 Henderson Fire Department originally started out in 1942 as the Basic Townsite Fire Department, construction of Basic Magnesium, Incorporated (BMI), built on a parcel of uninhabitable desert land, midway between Boulder City and Las Vegas. BMI’s location served to be an ideal spot for the production of magnesium during World War II. By July 1943, less than one year after production had started at the plant, BMI became the world’s largest producer of magnesium. Henderson’s first two fire stations completed construction in August 1942.

The Townsite Fire Station (Station 1) was constructed on Atlantic Avenue and Marine Street and the Plant Fire Station (Station 2) was built on Atlantic Avenue just north of Lake Mead Boulevard. The stations provided fire protection to the city and consisted of paid and volunteer firefighters for BMI. In May of 1943, the Federal Government announced the change in name from Basic Townsite to Henderson, Nevada. Newspapers began referring to the fire department as the Henderson Fire Department. In less than five years, Henderson’s population grew to approximately thirteen-thousand plant employees and their family members.

By 1947, magnesium production was no longer necessary for defense efforts and most of the BMI employees moved away. With the help of local industry, the City of Henderson, Nevada was officially incorporated on April 16, 1953.  Additional info provided by the Henderson Fire Department.