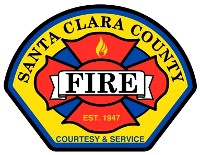 In 1997 the department changed the named to the Santa Clara County Fire Department. In 2008 the Saratoga Fire District contracted for fire services, and in 2013 Morgan Hill did not renew its contract for services from the district.