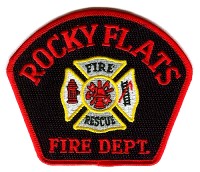 Rocky Flats Fire Department, (U.S. Department of Energy), the department was formed in 1953 and covered 9.75 square miles in Boulder & Jefferson Counties that served the Rocky Flats, a nuclear weapons manufacturing and processing plant between the cities of Arvada and Boulder.

A protective force was housed in a fire barn in 1952, until a new station was built that same year.

The site was operational till 1996 and demolition was completed in 2005. The Fire Department was in operation until June of 2005.

The Department of Energy is responsible for long term surveillance and maintenance of the 1,300 industrial acres and the U.S. Fish & Wildlife Service has developed a conservation plan for the remaining 4,000 acres.

The area is currently protected by the Rocky Mountain Fire Protection District.