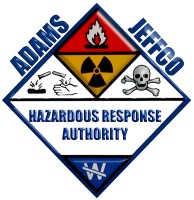 The Adams and Jefferson County Hazardous Response Authority (AJCHRA) is an autonomous government entity created through an intergovernmental agreement (IGA) between the two counties and run by a Board of Directors. The Board of Directors is selected by member agencies and represents cities and towns, law enforcement, fire departments/districts and others interested in hazardous materials emergency response.

In 1977, a joint Mutual Aid Agreement was developed among the fire departments of Adams County. These agencies recognized the need for hazardous materials response, while recognizing the burden it placed on each agency. In 1991, the Adams County Commissioners adopted a resolution approving an Intergovernmental Agreement (IGA) for joint hazardous materials response within the county. The resolution launched the joint Adams County Haz-Mat Response system.

Similarly, in 1980 a group of concerned first responders in Jefferson County representing fire department, fire districts, law enforcement and emergency managers met to bring about a countywide response team. With the large costs associated with hazardous materials response, as well as continuing laws governing the requirements and training for responders, it was apparent the most prudent and cost effective mechanism at that time was the formation of a county wide hazardous materials response team.

A significant hazardous materials incident took place in Adams County in August of 1995. Mutual aid was requested and received from the Jefferson County Hazardous Material Response Team. This joint effort was a major factor in the successful mitigation of the incident. After this event, the two County Haz-Mat Boards met to discuss how they each could provide better service to their members as well as the population as a whole, while operating more cost effective and efficiently. There was also a desire to operate in a more dynamic yet safe environment. This lead to a decision to operate the two teams jointly.

The success of this program lead to the signing of the “Intergovernmental Agreement Establishing the Adams and Jefferson County Hazardous Response Authority” in October of 1997. The HazMat team consists of specially trained individuals that are part of the fire departments/districts, law enforcement agencies and other specialized personnel within member agencies of the Authority. While hazardous materials are not new, interest in the subject has greatly increased due to several factors including, training requirements, regulatory environment, and special hazards such as terrorism, drug labs, and environmental crimes.