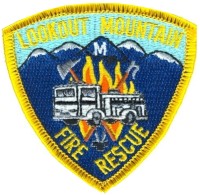 The land for the Lookout Mountain Station was obtained and a station was built in 1963 with volunteer labor.

A second station was built in 1973 near the Rainbow Hills area on property obtained from the State Highway Department. The property will revert back to the State if it is no longer used for fire protection purposes.

In 1984, the Lookout Mountain District entered into a 40-year lease with the Alpine Rescue Team. Alpine built a new station on this property to house trucks and equipment as well as an office and meeting facilities.

In 1995, the far western portion of the district west of Rainbow Hills was excluded and placed in the Evergreen Fire Protection District at the request of the residents of that area.