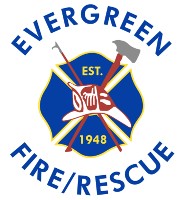 Station 2 and Station 4 are both staffed by EMS Providers 24/7 with two ambulances at each station. Fire response is handled by the Evergreen Fire Volunteers.