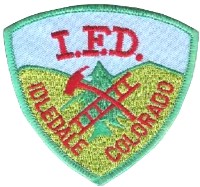 Idledale Fire Department (IFD), was formed in 1948 and located in Jefferson County.

The district originally consisted of an area from Bear Creek Canyon near the town of Morrison and west to Kittridge on both sides of the Bear Creek drainage extending northward to Hwy. 40 and west to the El Rancho area.

At the time the Genesee development was proposed, an exclusion of the Genesee area took place which created the new Genesee Fire Protection District and left the remaining Idledale District divided.

From the fire station in Idledale the District curved to the North and the West all the way to El Rancho. To service the north end of the district, a satellite station (Station 2) was placed on the north end of Grapevine Rd. This provided fire protection for Riva Chase, Cold Springs Ranch, and the Genesee Park area.

Idledale Fire District was a member of the Tri-County Volunteer Firemen’s Association.

Highland Rescue Team was formed by the department volunteers in 1964.