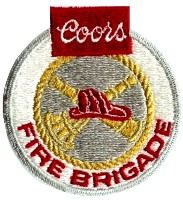 Coors Fire Brigade was originally called the Adolph Coors Company Fire Brigade, and covering the Coors Brewery Plant located in Golden until 1992 when the the Golden Fire Department took over the service area with a contract, until 2010 when Coors stopped the contract. The land inside of the Coors brewery is not part of the city of Golden, and the brewery was not legally obligated to pay any property taxes that would fund fire protection services.

Currently the brewery is served by Fairmount Fire Protection District with mutual-aid from Golden Fire Department if needed.