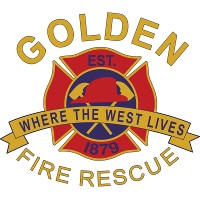 The Boston Company established Golden City in 1859 at the mouth of Clear Creek Canyon with no formal fire, but citizens had a few volunteer bucket brigades, until 1871 when interested citizens formed Golden Hook and Ladder Company, the fire company had no equipment.

By 1874, the Excelsior Fire Company purchased a used engine known as the “Fire King” from the City of Omaha, Nebraska. Despite the initial rivalry, Golden’s two fire companies both responded to fire in the city at this time. Because of their different equipment and focuses, the companies complemented each other in their firefighting activities much as engine companies and truck companies do on present day departments.

By 1877, the two fire companies reorganized.  The Excelsior Fire Company became the Excelsior Hose Company. The Rescue Hook and Ladder Company became Everett Hook and Ladder Company. Another group, the Loveland Hose Company, organized in 1879. “This hose company was an independent organization, but it was stated that, ‘at the same time, it would actively cooperate with the other companies at all fires.’ At the end of 1879, all three companies joined together to establish what we now know as the Golden Fire Department. Additional info provided by Golden Fire Department.

Golden Fire Department also served and protected the Coors Brewery Plant from 1992 to 2010, and before the contract in the 1990’s, the Coors Fire Brigade served the brewery.

Stadium Medical is the EMS contract provider for the district.