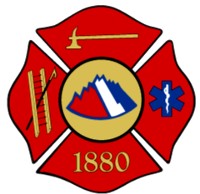 Red White & Blue Fire District boundaries are Hoosier Pass to the South, Frisco town limits to the North, the Continental Divide to the East, and the Tenmile range to the West.