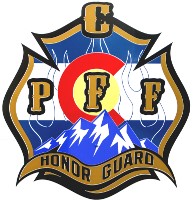 Colorado Professional Fire Fighters Honor Guard (CPFF), formed in 2006 to assist fire departments of the State of Colorado with most any event. The group is made up of fire fighters on department Honor Guards from across the state which belong to the IAFF and CPFF organizations.

In early 2008 members of the Arvada Fire Protection District attended an Honor Guard class and decided that the class could be taught in Colorado. Upon returning they talked with and gained the support of their department. Next they talked with the Commander of the CPFF Honor Guard with the idea, desire and plan to help their fellow fire fighters and police officers in representing their departments and honoring their personnel. This idea and plan was developed creating the CPFF Honor Guard Academy, supported by the Arvada Fire Protection District. Many hours of work were spent meeting, writing and researching the best way to teach and instruct the class. The right instructors were found and brought in to assist with all the tasks needing to be accomplished. Our instructors have many years of experience with their department Honor Guards, prior military experience, classes and conferences attended. Every instructor has the desire to honor our fallen, to teach, and instill that same desire in each student that attends our Honor Guard Academy.

The honor guard started classes in 2009 and have conducted classes with great success ever since and have been part of the States Honor Guard Symposium since it was started. The group has a lot of passion for the Honor Guard and want to pass it on to others. The class is moving forward and always looking for interested students from fire departments, law enforcement agencies, and EMS agencies from all over.