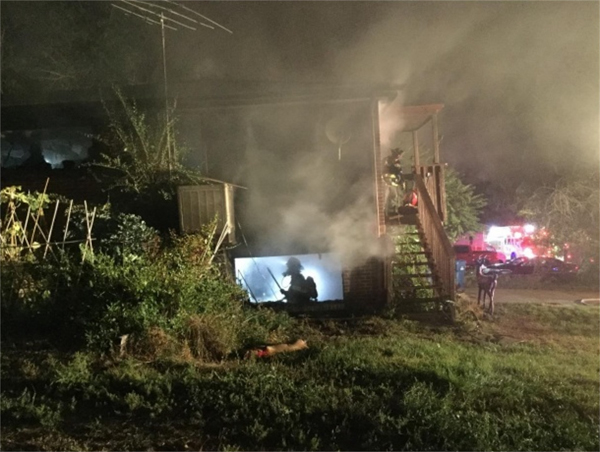 On September 28th, 2017 at 20:48 Denver Fire Department responded to a reported structure fire in the area of W. Dartmouth Ave. and S. Clay St. Engine 25 arrived with nothing showing and called to Engine 36, which was responding from the south at approximately W. Floyd Ave. and S. Clay via Dale Court, and Engine 36 found a confirmed working structure fire at 3255 S. Clay St. in a 2-story single-family dwelling with a garden level in the offensive strategy. Engine 25 arrived and laid in and secured the water supply to Engine 36, and secured a second water supply in front of the house. Engine 37 went to the hydrant at Dartmouth and Clay to support Engine 25’s water supply. Chief 7 arrived on scene and assumed command and initiated an offensive fire attack. Engine 25 reported an initial size-up that fire was blowing out both the Alpha and Bravo sides of the structure and initiated the quick-knock tactic, coordinating door control with Tower 23 for the Bravo side and Rescue 1 on the Alpha side, and the main body of fire was greatly knocked down, allowing the attack and search crews greater access to the structure. The fire was quickly brought under control, and there were no injuries to firefighters or civilians. Unfortunately, there were three pets (2 dogs and a cat) that did not survive the fire. Engine 37 and Denver Paramedics did try to resuscitate the animals but were not able to do so. The fire cause is under investigation. Additional information was provided by Denver Fire Department.