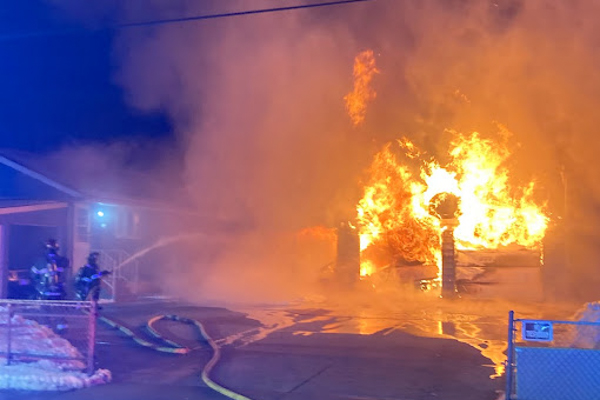 At 23:28 on December 31st, 2022 South Adams County Fire Department, Adams County Fire Rescue and Platte Valley Ambulance was dispatched to an unattached building fire in the 7900 block of Larkwood St. in the Derby area. AdCom updated responding units of an unattached garage fire with flames from the roof with loud bangs and a vehicle inside. Engine 23 arrived to a detached garage, fully involved, establishing their own water supply, established Larkwood Command in the defensive strategy and pulled a 2 1/2″ attack line. Tower 24 arrived and was assigned primary search in the exposure structure. Battalion 21 arrived on scene, assumed command and requested a major incident tone. Engine 22 arrived and pulled a second line off Engine 23 for fire attack on the Delta side exposure. Battalion Chief 11 arrived on scene and was assigned to perform a second 360 walk-around report. Tower 24 made entry into the structure and encountered heavy heat and reported the whole house had flashed and they were backing out. Battalion 11 requested an additional crew to perform a search on the Bravo exposure. Command assigned Engine 14 to pull a 3rd line off Engine 23 and pull a line into the exposure. At 23:48 priority traffic was transmitted by Engine 22 during a primary search in the basement of the exposure upon locating fire victim who was removed from the structure and evaluated by Platte Valley EMS. At the 15 minute on-scene mark the fire in the unattached garage had been knocked down and the fire victim was in the process of being removed by Engine 22, Engine 14, and Engine 23. Battalion 11 was reassigned as operations with Engine 14 and Tower 24 working under him. Engine 26 arrived and was assigned to control utilities. At 01:42 multiple units were clearing the scene and command was transferred back to Engine 23. One injured firefighter and one fire victim were transported to local hospitals by Platte Valley Ambulance Service. Adams County Sheriff’s Office is investigating the incident as being a possible arson. 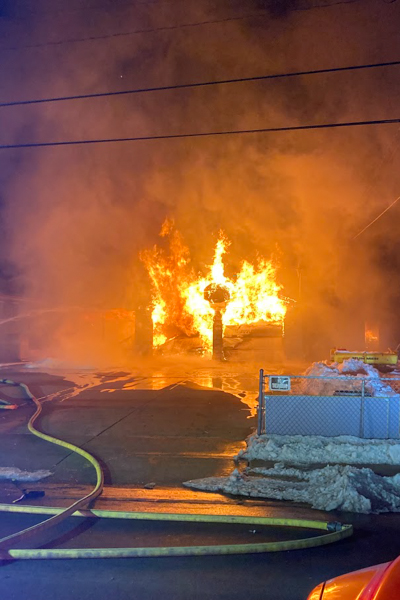