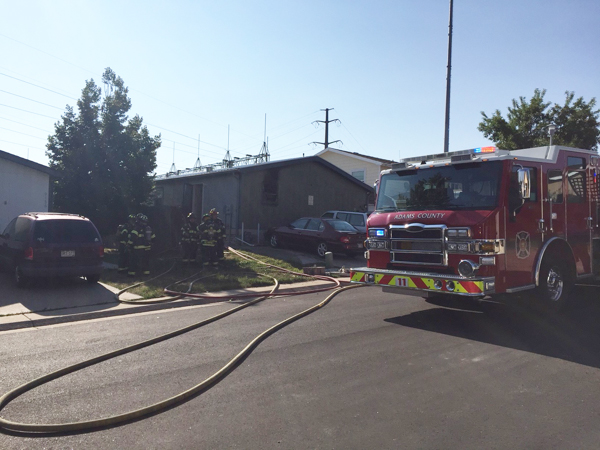 At approximately 08:26 on August 10th, 2018, units from Adams County Fire Rescue, North Metro Fire Rescue District, Thornton Fire Department and Westminster Fire Department were automatically dispatched to the 9100 block of Fayette St. in Federal Heights. The first unit arrived at 08:33 and saw smoke coming from a residential home. Firefighters began to simultaneously fight the fire and look for possible people inside. The fire was under control at approximately 08:39. The cause and origin of the fire are under investigation. There were no injuries. A total of nine units and 20 firefighters from Adams County, North Metro, Thornton and Westminster Fire districts responded to the incident.

Mike Ramos, Deputy Chief of Operations for ACFR said this incident is a great example of how the north area departments work together to provide the best service to our residents, regardless of jurisdictional boundaries. “Federal Heights Fire Department is a one-station department,” Ramos said. “At the time of the fire, they did not have any available units. By design, the incident was handled without a glitch by the next closest units from the four neighboring jurisdictions. Just like in this incident, Federal Heights Fire regularly responds to fires in other jurisdictions as part of the same system.”