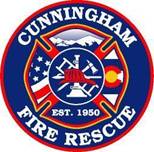 Cunningham Fire Protection District was a member of the Tri-County Volunteer Firemen’s Association.