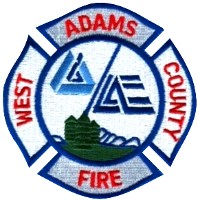 West Adams County Fire Protection District (WACFPD), formed in 1946 in Adams County including the towns and areas of Eastlake & Northglenn.

In 1994, the West Adams County Fire Protection District and Thornton Fire Department merged to form the North Metro Fire Authority covering the cities of Thornton, Broomfield and Northglenn until December 31, 1999, when it was decided to de-merge the two districts, and the name changed in 2000 to the North Metro Fire Rescue District.