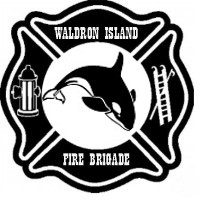 The anticipated long response times have prompted the development of an informal island fire brigade, and to acquire an old military style truck carrying a 1200 gallon water tank to which a high capacity pump and fire hose were added. With the aid of community funding and support, the Waldron Island Fire Brigade was able to commission the building of 3 smaller water wagons or trailers, each with 200 gallon capacity, mounted high pressure pump and 100+ feet of fire hose. These trailers are strategically placed around the island during the drier months, to allow anyone to hook-up and take them to wherever they are needed.

These efforts notwithstanding, islanders are under no illusion that this equipment is sufficient to defeat a significant fire. Rather, they hope that it will help the brigade to control and delay the spread of any wildland fire until external help can reach the island. Additional info provided by Washington DNR.