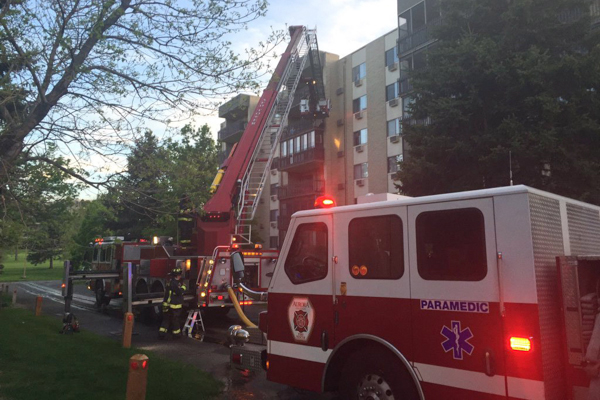 On May 21st 2016 Aurora Fire Rescue responded to a kitchen fire at 14000 E. Linvale Place. Tower 6 was first to arrive at Heather Gardens, a senior living community, and reported nothing showing from the six-story building. After a brief investigation Tower 6 confirmed there was a working fire on the top floor. The crew split 2 and 2 for interior recon and exterior aerial placement. Firefighters from Tower 6 searched without a charged hose line, and located a tapped civilian in heavy smoke conditions with no visibility. The ground level standpipe ruptured, preventing rapid water supply to the Engine Companies assigned to fire attack. The interior members of Tower 6 become lost and were unable to locate a door to exit with the victim they found, and they called a mayday. Tower 8 had just been assigned to RIC before the mayday was called and immediately ascended the stairs to begin search and rescue. A 3rd Alarm equivalent and a 3rd ambulance was called as firefighter emergency procedures went into effect. Two lost firefighters and one civilian victim were quickly located and brought to safety. The mayday was ended and improvised fire attack efforts continued. A critical patient was transported and conflicting reports indicate that person later died. The sixth floor fire was quickly controlled once lines were in place and multiple companies were held for searches, overhaul and ventilation.