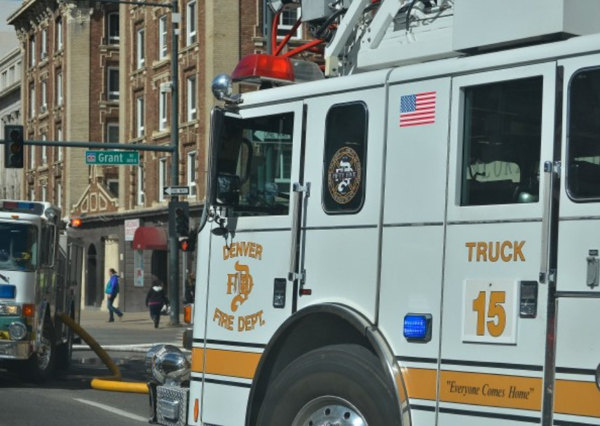 On March 15th, 2016 Denver Fire Department responded to a possible multi-family structure on fire at 1515 Grant St. Upon arrival companies found a 3-story apartment building with nothing showing and an odor of burnt food. Truck 8 gained entry into the fire unit with a water can and found a small kitchen fire which initially thought was knocked. A suspected wind-driven fire event occurred and conditions quickly went from light smoke to zero visibility and high heat. The crew from Truck 8 visualized the open 3rd floor balcony doors and moved toward them while conducting a primary search. A victim was located and removed to the balcony by the firefighters from Truck 8, who sheltered the civilian from the rolling flames. Truck 4 threw their aerial and ground ladder to the victim, Rescue 1 made entry and conducted a primary search while Engine 1, Engine 3 & Engine 6 advanced lines in for fire attack. Winds were gusting over 20 mph from the Charlie-Delta corner towards the Alpha-Bravo corner and light smoke quickly turned to heavy smoke, high heat and heavy fire venting out the Alpha side. The crews from Truck 4 safety brought the victim to the ground while heavy flames rolled over them. An interior attack with multiple companies kept the fire to the unit of origin. All searches were negative, and the lower floors sustained significant water damage. American Red Cross was called to assist residents, and the injured occupant was transported to a local hospital. More photos and story here: Denver Fire – Heat Damaged Protective Gear