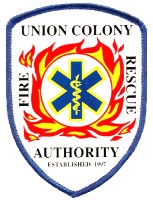 Union Colony Fire Rescue Authority was formed when an agreement was reached between the Greeley Fire Department (Colorado) and the Western Hills Fire Protection District (Colorado) in 1997. The history of the Authority made several attempts to have other fire agencies join the Authority, and when it was realized that this would not occur beyond Greeley and Western Hills, it was time to begin the termination process, and the named was changed to Greeley Fire Department in 2011.