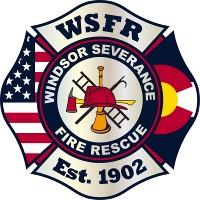 Windsor Severance Fire Rescue has an agreement with UCHealth EMS as the medical provider for the district.