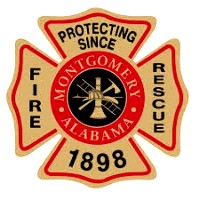 Montgomery Fire Department was originally formed in 1848 as a volunteer fire company bucket brigade called the Dexter Company One, and later two more were formed called the Alabama Company and the Mechanics Hook & Ladder Company. During the Civil War, much of the City of Montgomery was left unprotected because most of the volunteers had been called into service. By 1865, the Civil War was nearing the end and a Union Cavalry Unit, called Wilson’s Raiders was quickly approaching Montgomery. It was decided that before the City surrendered, 85,000 bales of cotton and 40,000 bushels of corn would be burned to deny this supply to the Union soldiers. The burning cotton bales and bushels of corn were so intense that embers from the fire threatened to burn the city. Ironically an African-American fire fighting company, which later became known as the Grey Eagles, saved the town from the burning cotton and corn.

By 1887, the City of Montgomery had five volunteer companies and the newly formed Lomax Company, and in 1898 the Montgomery Fire Department was formed as a paid fire department.