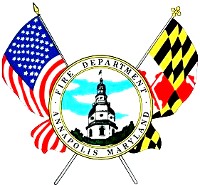 The first organized volunteer fire department in Annapolis was formed in 1839 when the Maryland General Assembly authorized the formation of the Independent Fire Company which operated until it was disbanded (1861-1865) during the Civil War. The Company was reformed in 1884 as the Independent Fire Company Number 2. The second fire company, Rescue Hose Company Number 1 organized in 1879 and the third, Water Witch Hook and Ladder Company was formed in 1885. Meanwhile on the outskirts of town the Eastport Volunteer Fire Company formed in 1886 and in 1911, the West Annapolis Fire and Improvement Company was established on the west side of the City. The West Annapolis Volunteer Fire Department would eventually relocate to the Anne Arundel County Fire Department in 1973. In 1986, the Rescue Hose, Independent and Water Witch Hook and Ladder stations were combined in the newly constructed Taylor Avenue Fire Station.