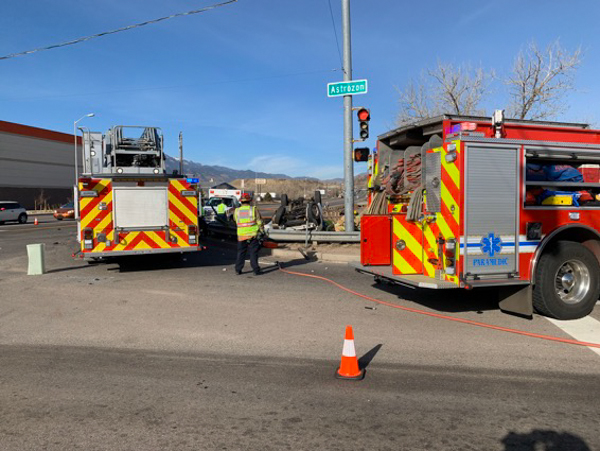 At approximately 09:53 on January 20th, 2020 Colorado Springs Fire Department responded to the intersection of Hancock Ave. and Astrozon Blvd. for a traffic collision. Once dispatched, Squad 11 went in service from a previous call and attached with Engine 4. After reading the call notes, Engine 4 requested a Truck company to respond due to the called being a rollover. Squad 11 arrived and confirmed a single vehicle was on its roof. Engine 4 arrived and confirmed one party was trapped in the vehicle, and advised all in coming units the patient was not critical and that their leg was pinned underneath the dash. Battalion 2 arrived and assumed command from Engine 4 and Squad 11 was directed to patient care. Truck 8 established extrication group. Rescue 17 arrived and assumed extrication group supervisor. 73 assumed the PIO position. Truck 8 reported there was a leak in one of their hoses and proceeded to cross ram the vehicle to await Rescue 17. At 10:38 the patient was extricated from the vehicle and transported to an area hospital. At 10:51 units began to slowly be released. The cause is currently under investigation by the Colorado Springs Police Department. Additional information provided by Colorado Spring Fire Department