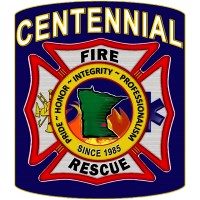 In 2016, Lino Lakes withdrew from the Centennial Fire District and started their own fire department named the Lino Lakes Public Safety – Fire Division.