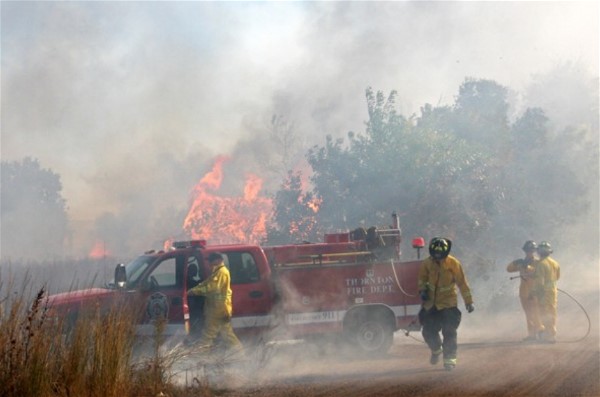 On Ocotober 13th, 2015 at approximately 14:30 Thornton Fire Department was alerted to a fire in the area of E. 160th Ave. (Hwy. 7) & Monaco St. in the Todd Creek area. Initially reports were of a brush fire, but later 911 callers reported that structures may also be involved. With a larger header visible for miles, auto-aid from the Greater Brighton Fire Protection District & North Metro Fire Rescue was requested. Engine 75, Attack 75 & Medic 75 all arrived to a brush fire with high winds that had pushed flames from east to west in a large open field on the eastern side of Monaco St. The fire eventually consumed an area covering approximately 5 acres, but not before spreading to several vacant out-buildings and a house. With the house fully involved on arrival, initial efforts were made to confine the brush fire as it spread in the direction of several additional buildings including at least one barn. Due to the location with no hydrants, tenders were used to shuttle the water. The fire was contained in approximately 30 minutes, and the cause remains under investigation.