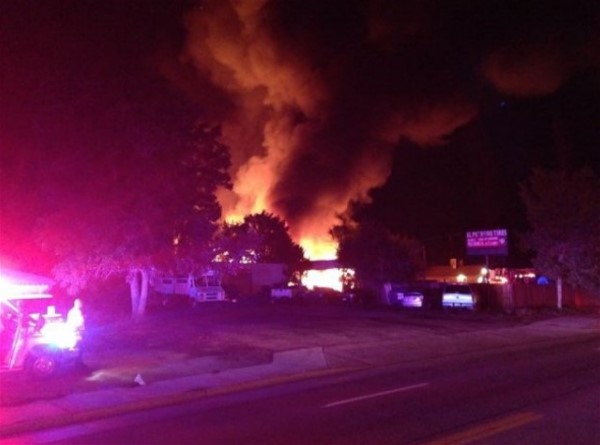 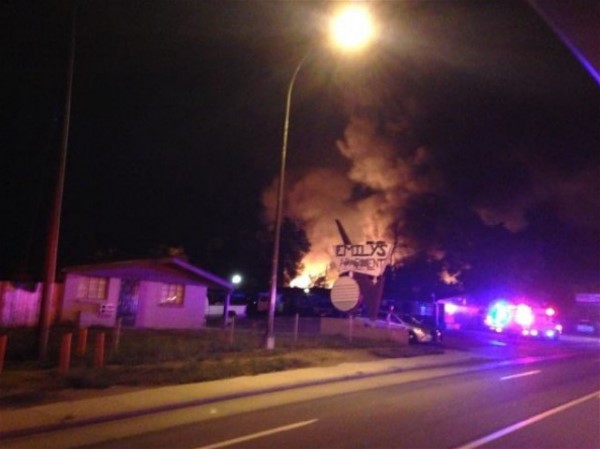 At 02:52 on September 22nd, 2014 Denver Fire Department was dispatched to a smoke investigation in the area of W. 3rd Ave, & Sheridan Blvd. Moments later dispatch upgraded the response to a structure fire, and at the same time West Metro Fire Rescue was dispatched to a confirmed commercial structure fire at 5275 W. 1st Ave. in Lakewood. Multiple 911 callers reporting large smoke showing. West Metro Engine 7 arrived to a large fire showing, and hand laid supply line from their engine back to W. 3rd Ave. & Sheridan Blvd. District 1 arrived, reported a fully involved structure with roof collapse, and assumed command in the defensive strategy. Engine 7 conducted recon and found a fully involved outbuilding with extension to the Bravo 1 exposure, a commercial building, and began attack with their deck gun. Tower 3 arrived and set-up on the Alpha side, Denver Engine 23 laid in from W. 2nd Ave. & Sheridan Blvd. and Engine 20 went to work on their plug. Engine 12 laid out from W. 3rd Ave. & Sheridan Blvd. and confirmed the fire was on the West Metro side of the street. Command requested that all companies switch their radios to RED SW for interoperability. West Metro Engine 1 laid in from the west and Tower 3 set-up for aerial master stream operations. Tower 23 set-up on the Sheridan Blvd. side and used their aerial for defensive attack, supplied by Engine 12. Multiple master streams were used for over 30 minutes to knock down the fire, and once the fire was under control crews started an extended overhaul. A search revealed that 6 horses were killed and at least one other was found with serious burns. No other injuries were reported and investigators were on scene. Additional information was provided by Denver Fire Department